What makes this UI developer resume and UX designer resume sample so Steve-Krug-level?

It makes a mini UX designer portfolio from your accomplishments.

Do it right, and you’ll get attention like an MS Surface Studio on a pile of Coleco ADAMs. Need help with a different kind of resume? Explore our other guides:

Haven't found what you're looking for? Check all our Resume Samples.

Now here’s how to make a UX designer resume or UI developer resume:

Your UX or UI Developer resume format is vital.

It’s got to show you don’t think branches are those leafy things on trees.

Expert Hint: Save resumes as PDFs unless the job ad invalidates them. UX resume PDFs don’t go into tech debt when you send them. They’re also machine-readable in 2019.

Most UX designer resumes are like Lorem Ipsum text.

Employers gloss over them, looking for a Laura Klein among the Andy Dwyers.

Start with a robust resume profile (in the form of a resume summary, resume objective, or summary of qualifications).

These UX and UI developer resume examples show how:

The first of those UX skills resume samples won’t make them think.

It adds value with accomplishments that prove UX and UI resume skills.

What if You’ve Got No Experience?

How to write an entry-level resume with no experience for UX designers?

Truly you have much to teach us.

That crushes the, “I haven’t had any UX designer jobs yet” mystery meat. Even with no experience, most user experience resumes can do that.

Should you say your goals in a resume objective? In 2019, show how you’ll work toward company goals instead. You’ll get servers-full of interviews.

Expert Hint: Write your UX designer resume summary or UI resume summary last. Then you won’t get stuck, since you’ll have plenty of great elements to choose from.

You only need a few accomplishments in a UI developer resume or UX designer resume.

The best UX resumes select them with great care.

The last of those UX designer resume examples is blue on black. The first is in the Bill Buxton zone.

The achievements tie you to the job like a GET request.

Your entry-level UI or UX resume can still commit.

Pack it with achievements. This entry-level UI resume example does it right:

Don’t copy-paste it to your resume for UI or UX designer resume.

Instead, focus on the few skills in the job ad.

Expert Hint: UI and UX jobs are growing much fast—15% in the next 10 years. But 90% of those jobs are dreck, so write the best UI or UX resume you can.

4. Turn Boring Education to a Reason to Hire You

Expert Hint: Is your UX designer resume experience underdeveloped? Chop your education into projects and positions. Then stock each with achievements.

They’ll make your resume for UI developer or UX designer jobs stand out like an Infinity Stone.

Why do those first UI developer resume samples sparkle?

They show you’ve got a massive cache of front end UX resume skills.

For a UI developer resume or UX designer resume with great front and back end:

Got questions on how to write a good UX designer or UI developers resume? Not sure how to put web design on a resume? Leave a comment. We’ll be happy to reply.

Written by Tom Gerencer, CPRW
Follow
Tom Gerencer (CPRW) is a Certified Professional Resume Writer, career advice writer and a resume expert at ResumeLab. Tom has been featured on BBC News, NBC, The Economist, Business Insider, Fast Company, and dozens of other outlets. His insights, commentary, and articles reach over a million readers every month. With inside knowledge of key industry players and in-depth research, Tom helps job seekers with advice across all professions and career stages. Tom holds a degree in English from Colby College. 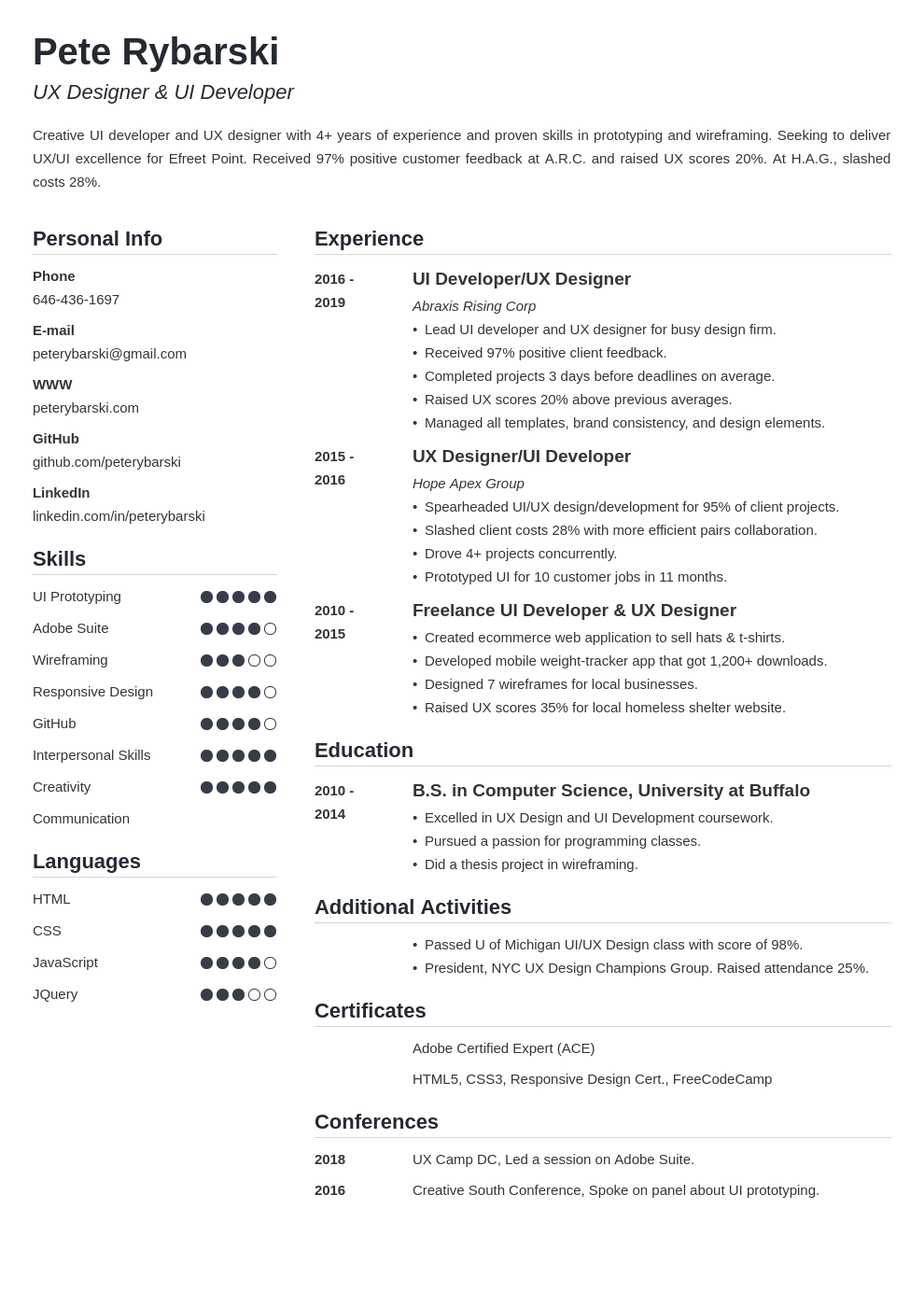 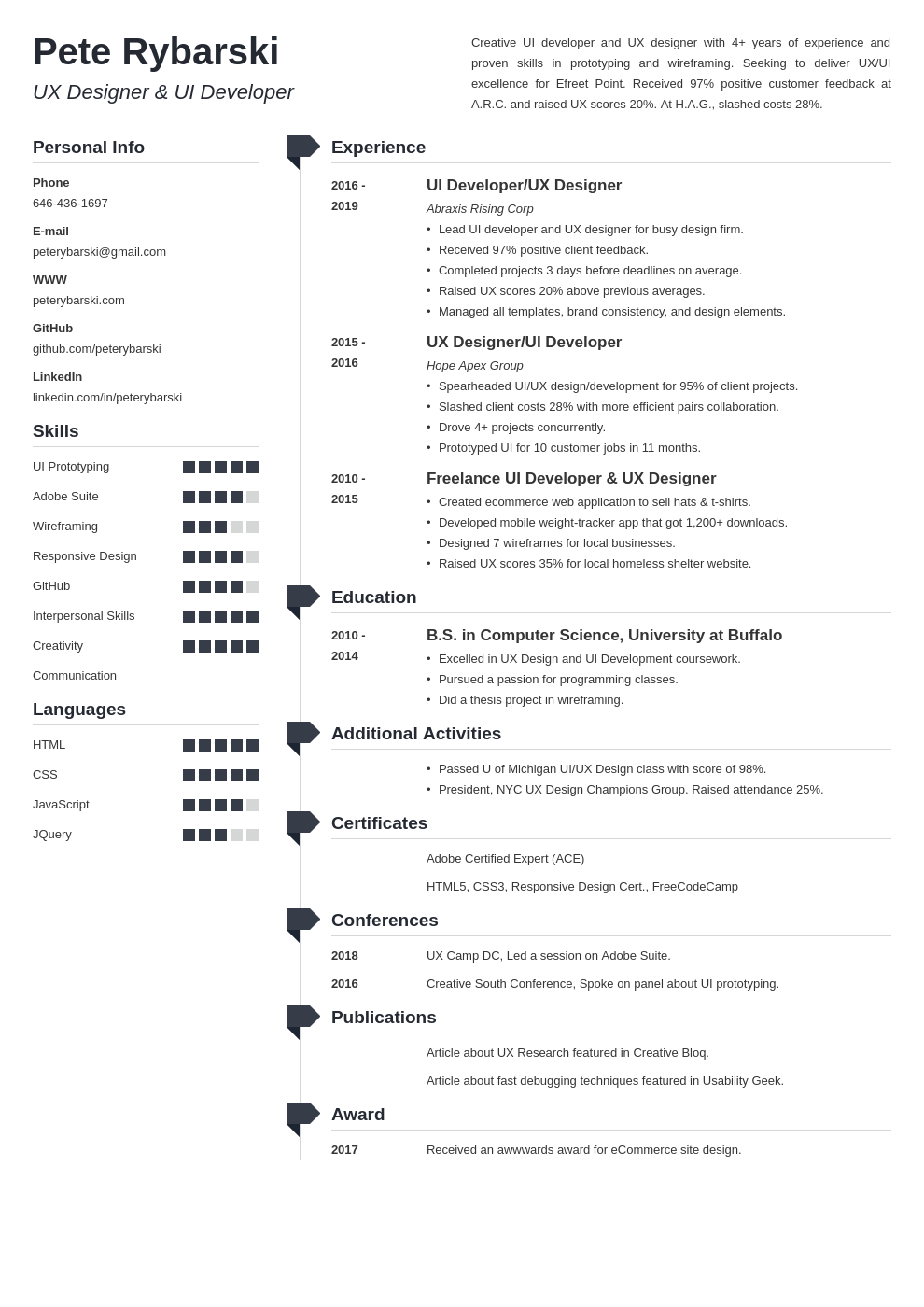 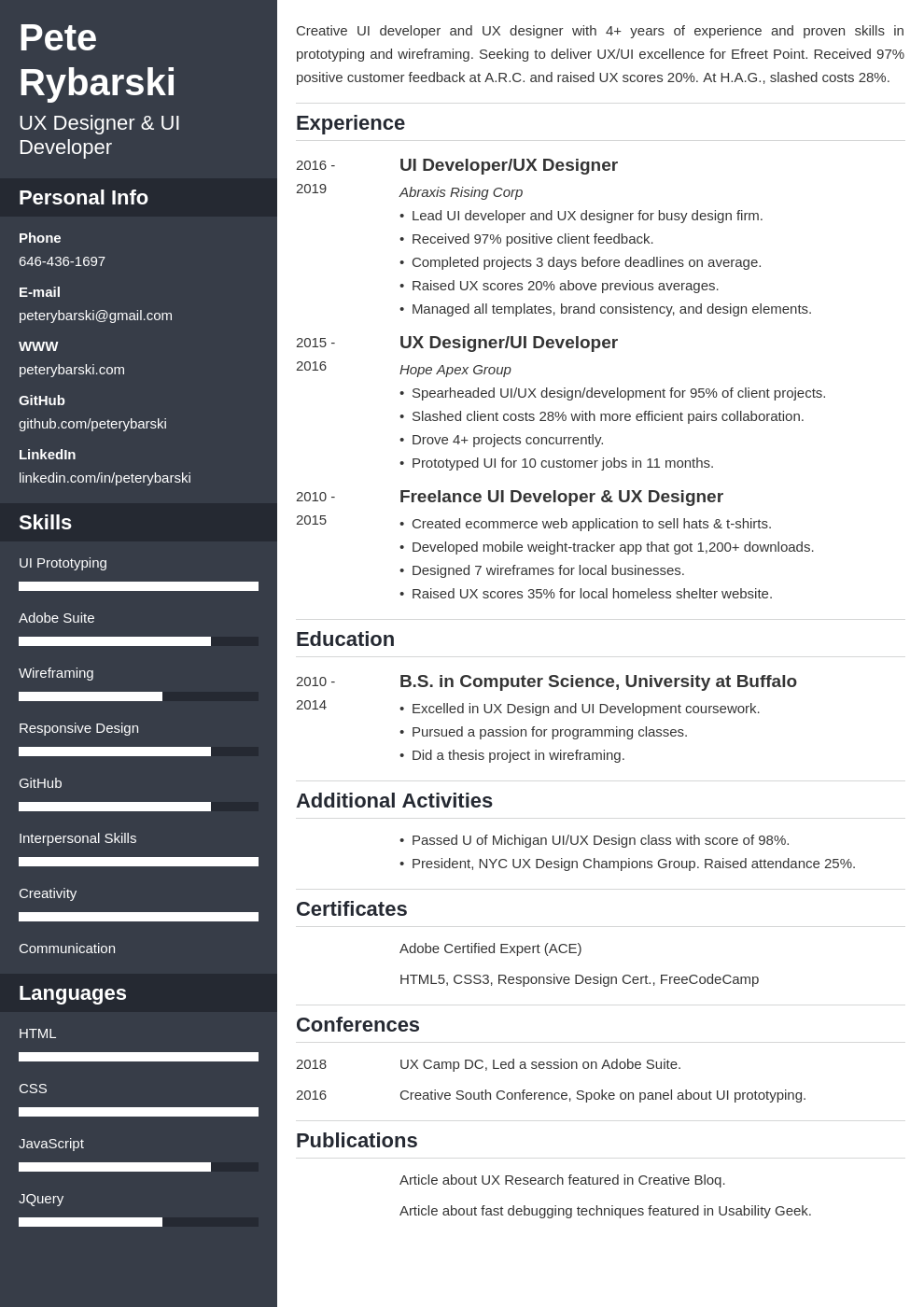 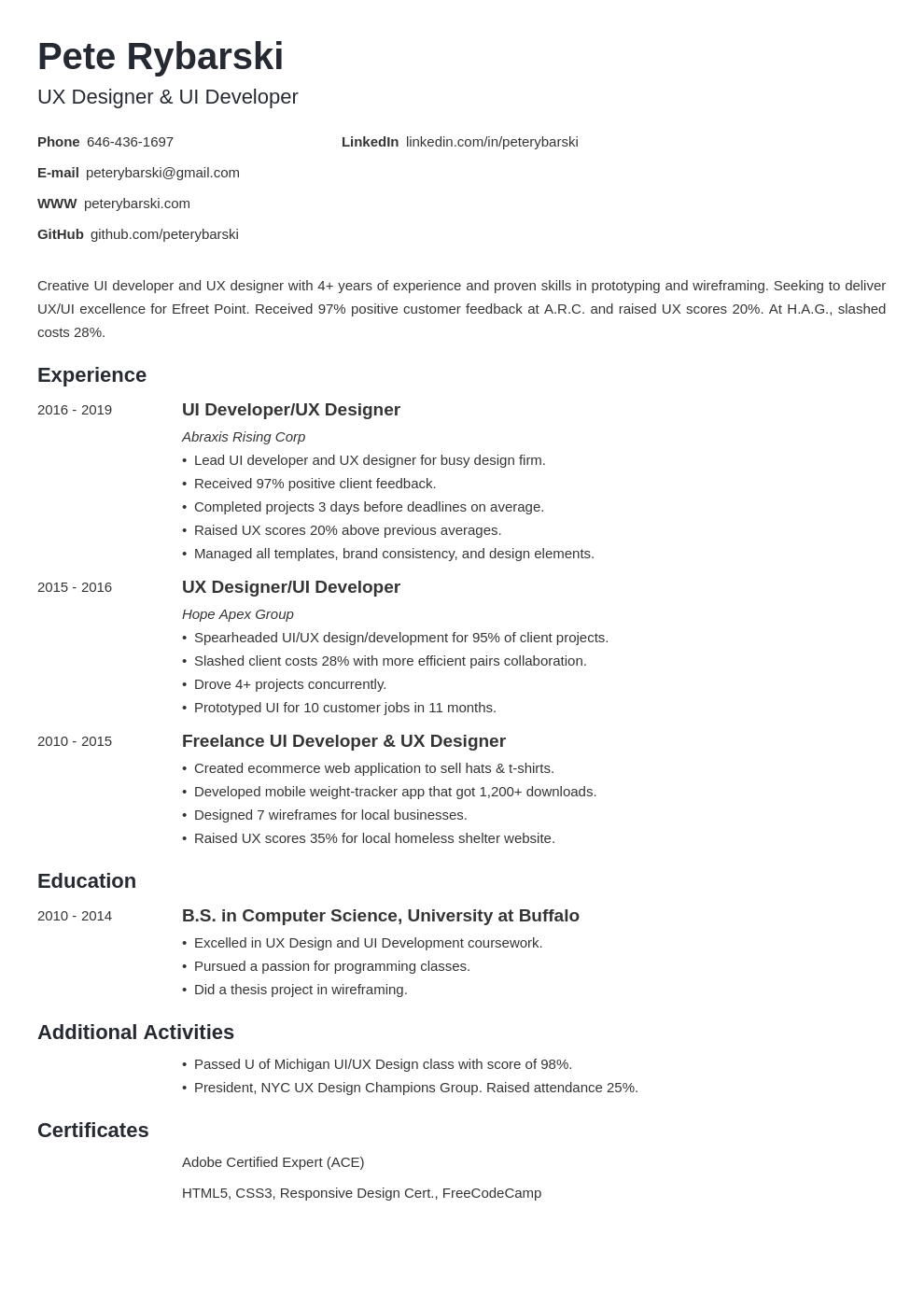 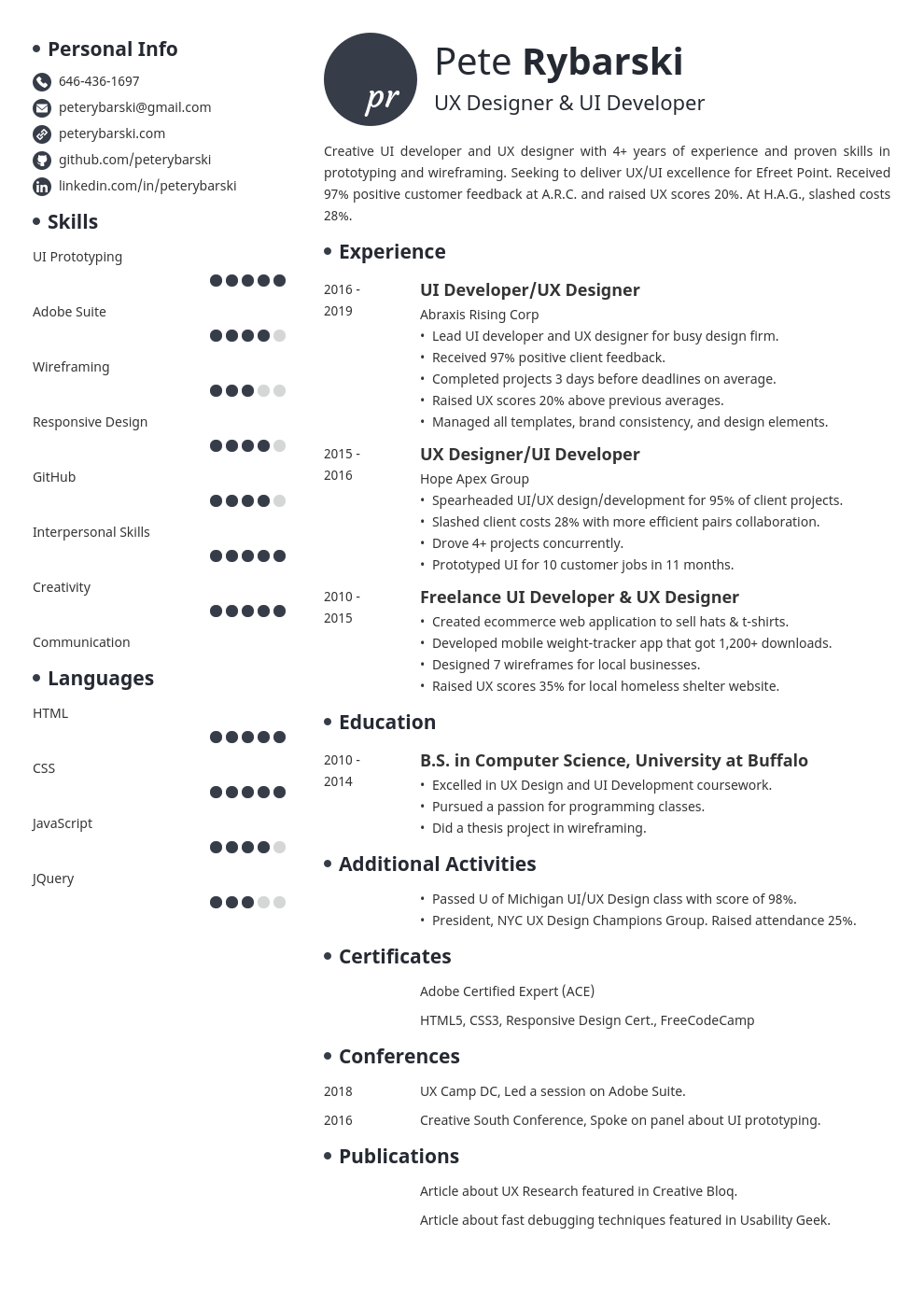 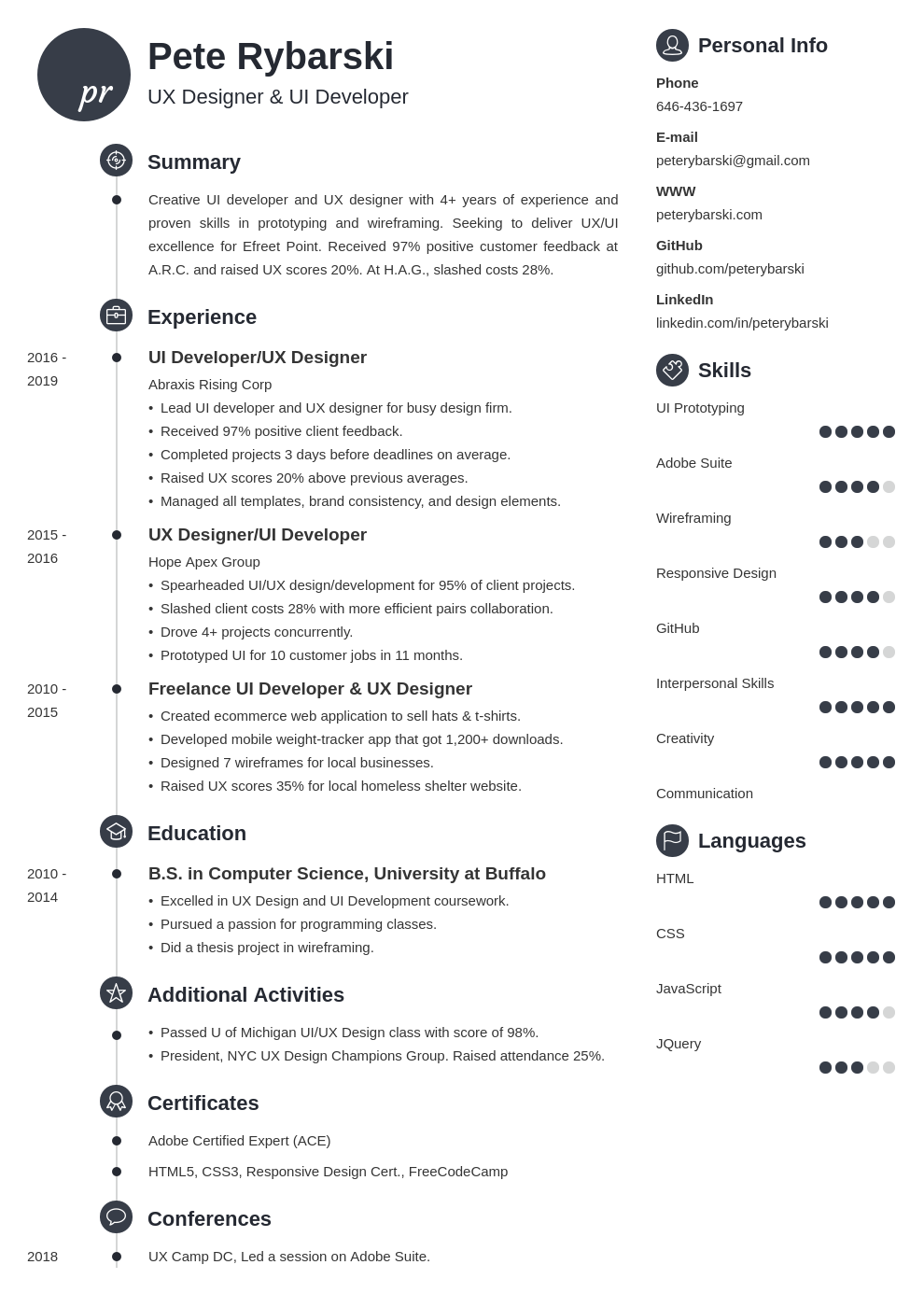 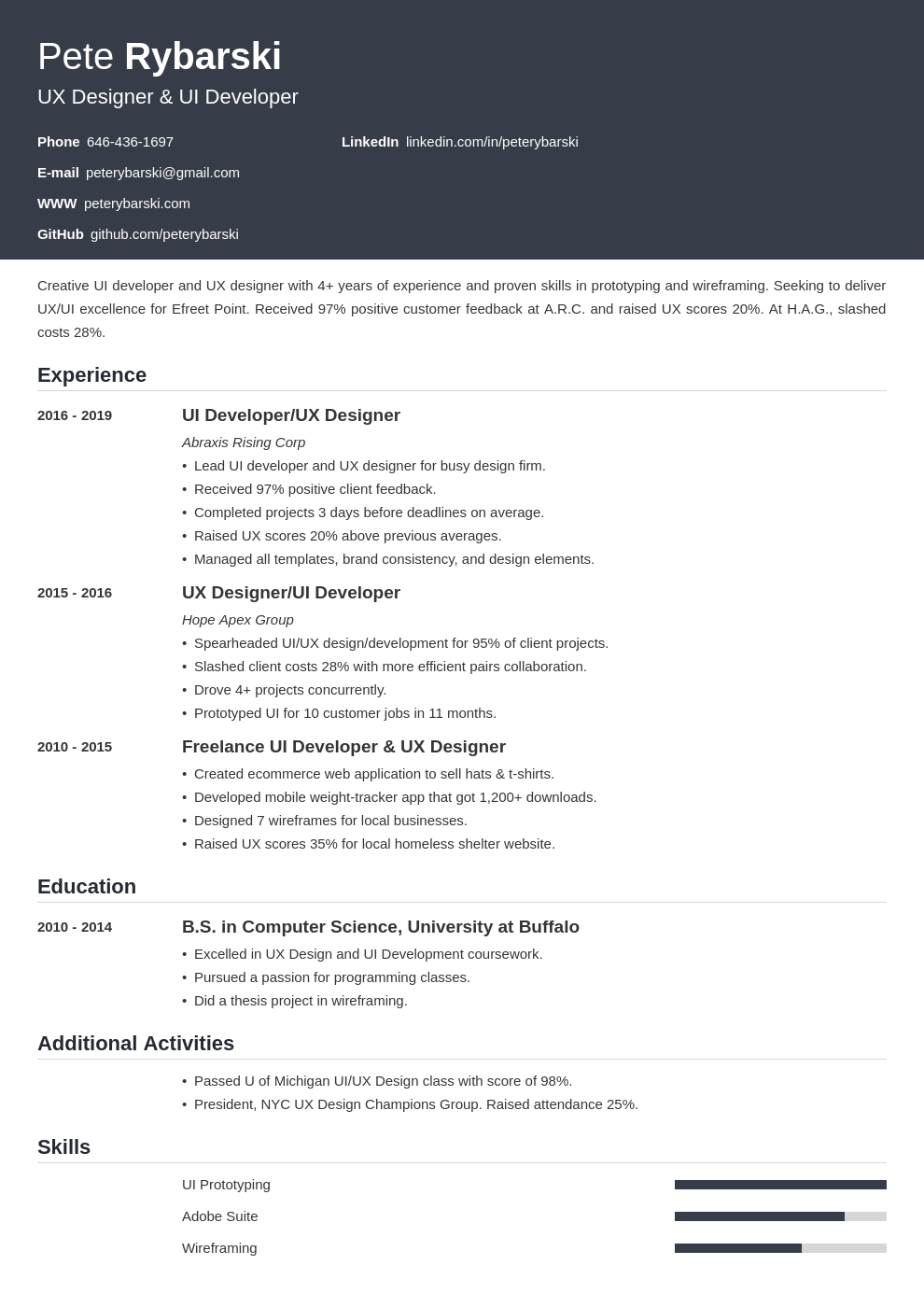 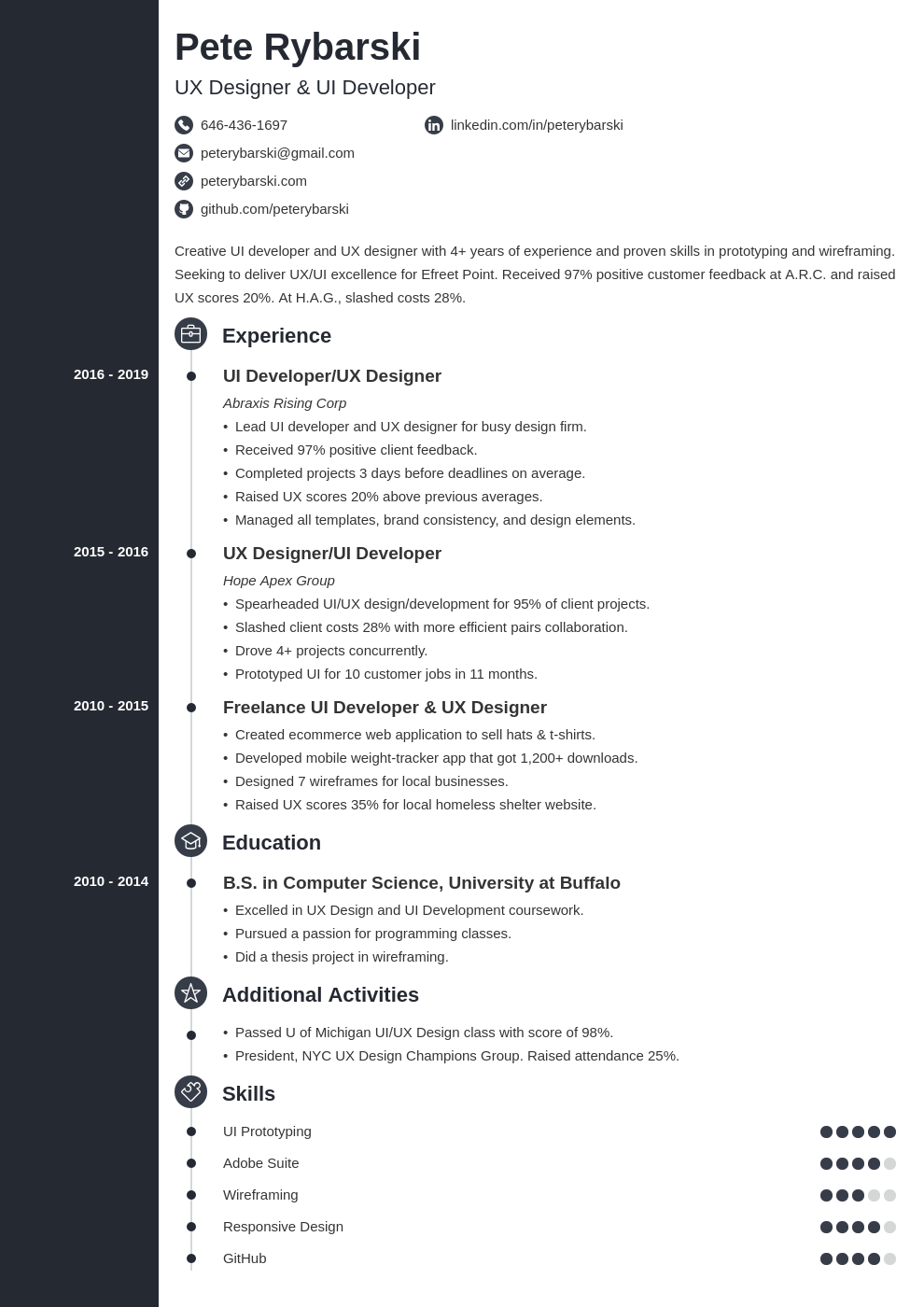 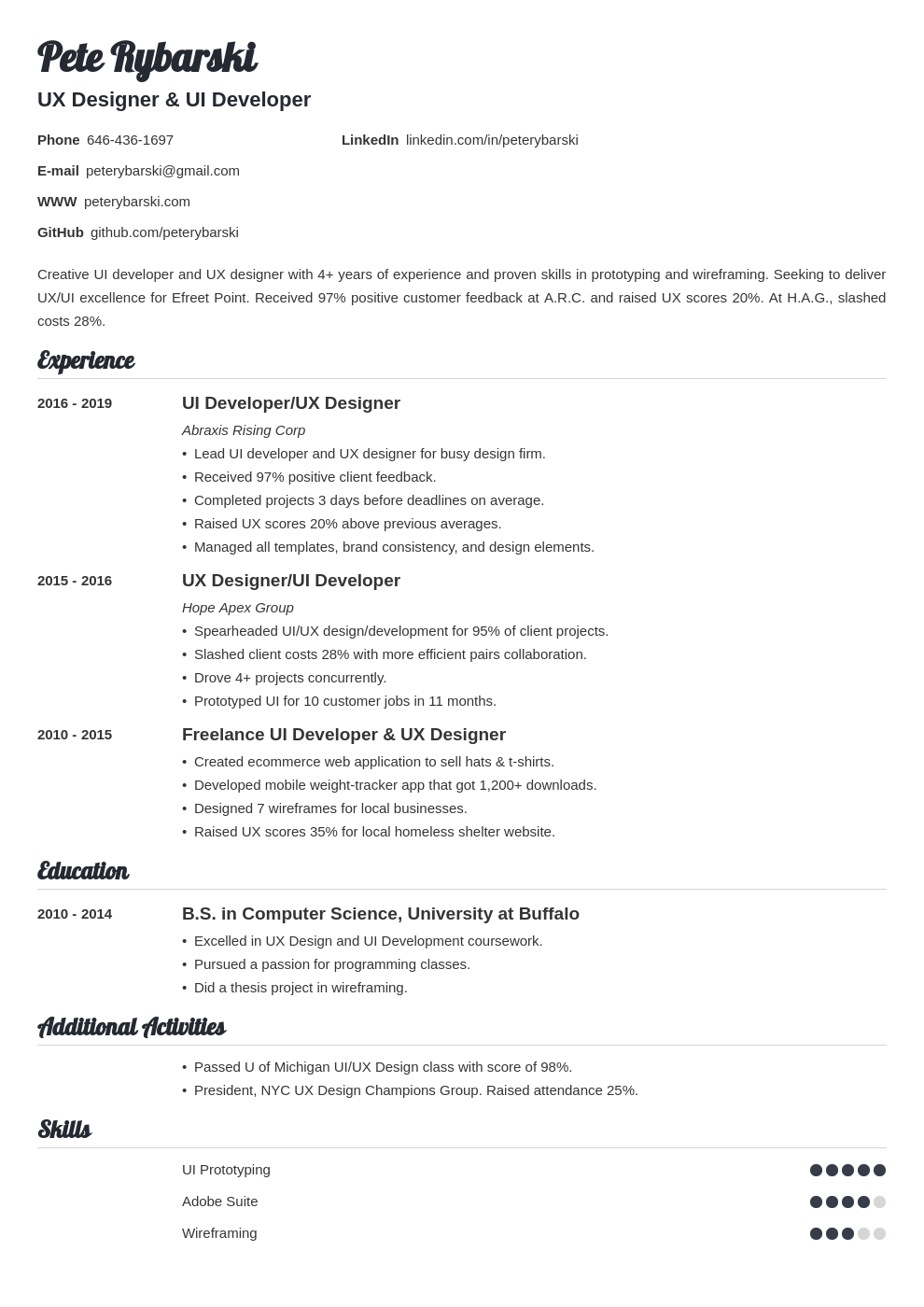 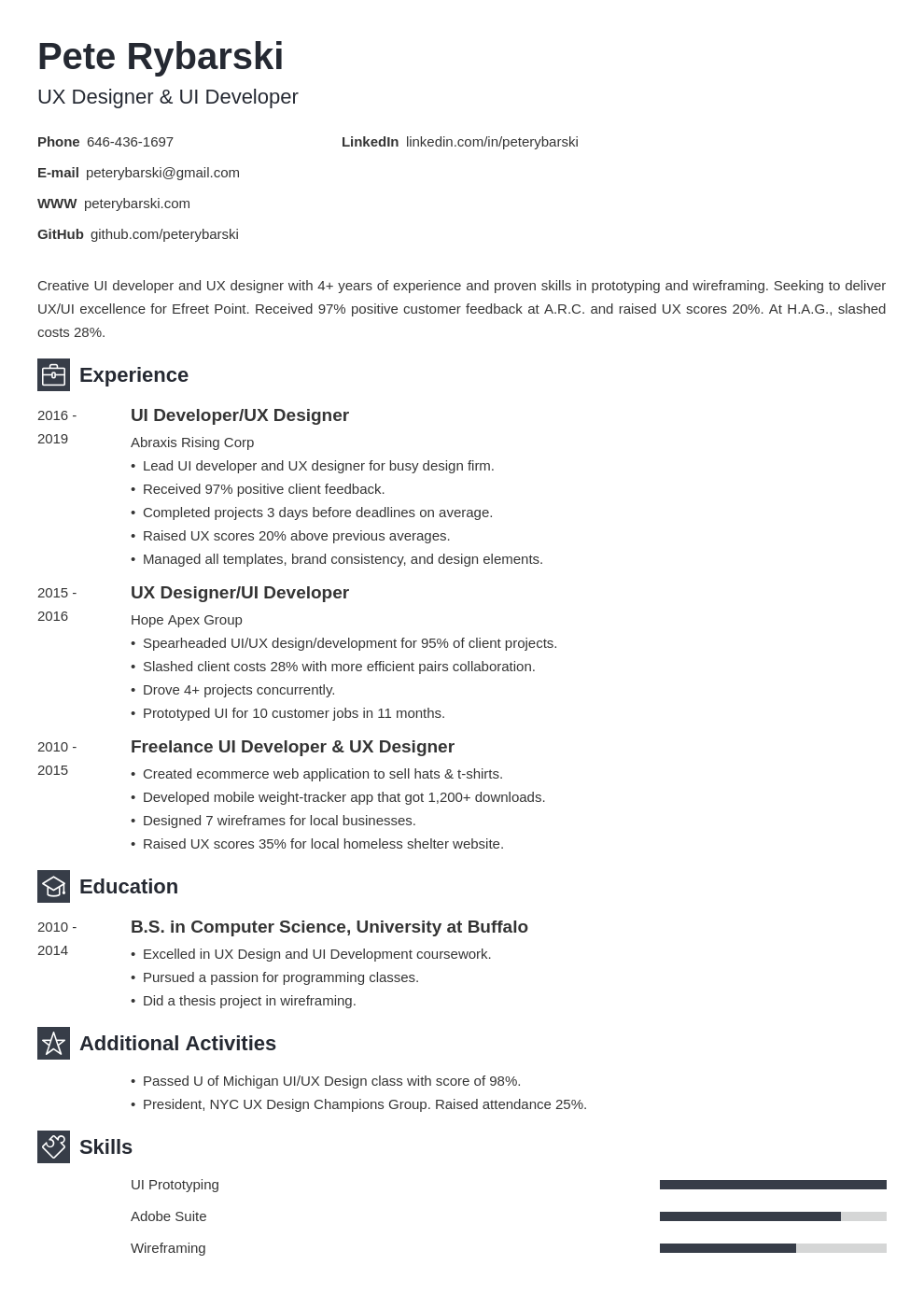 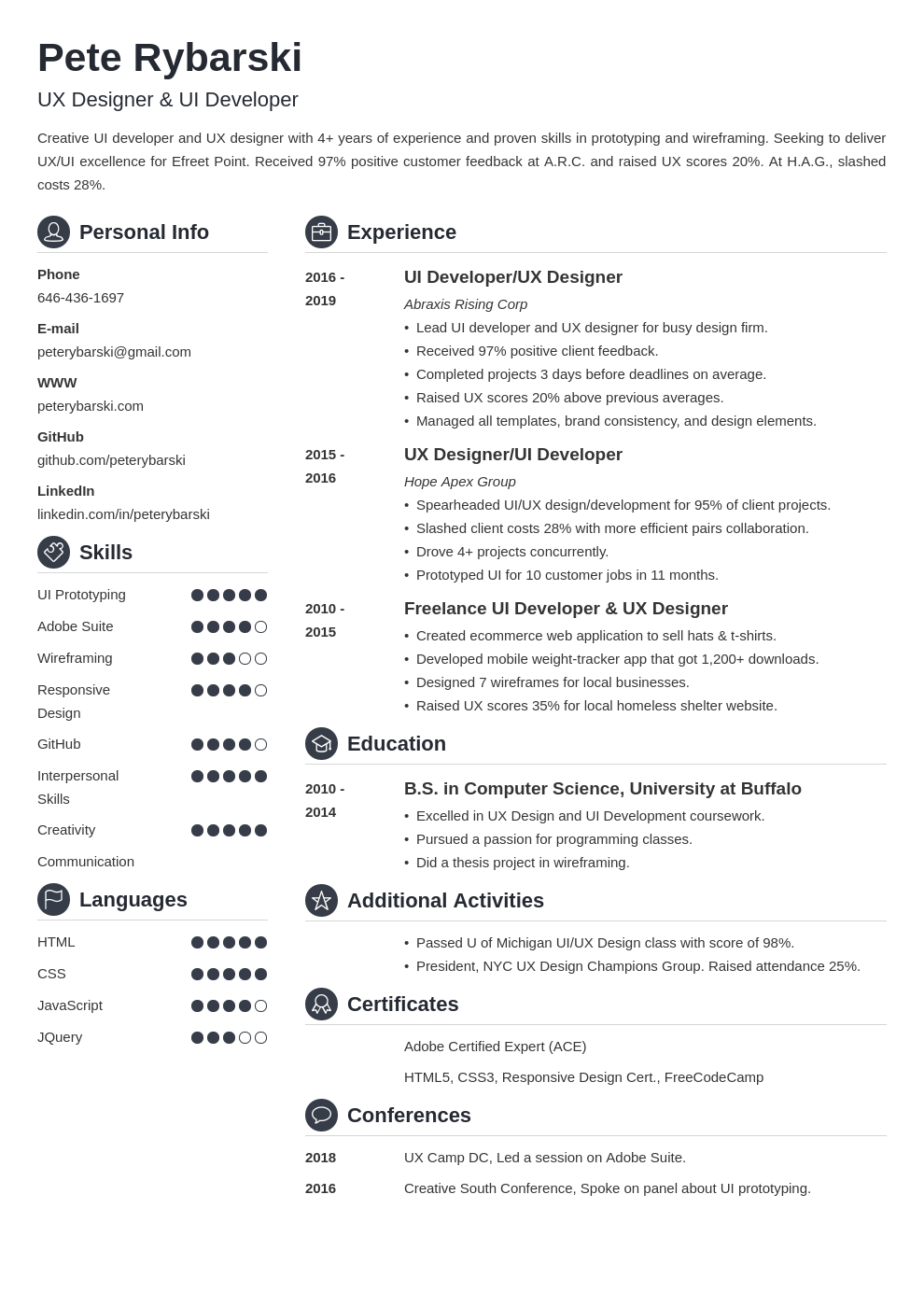 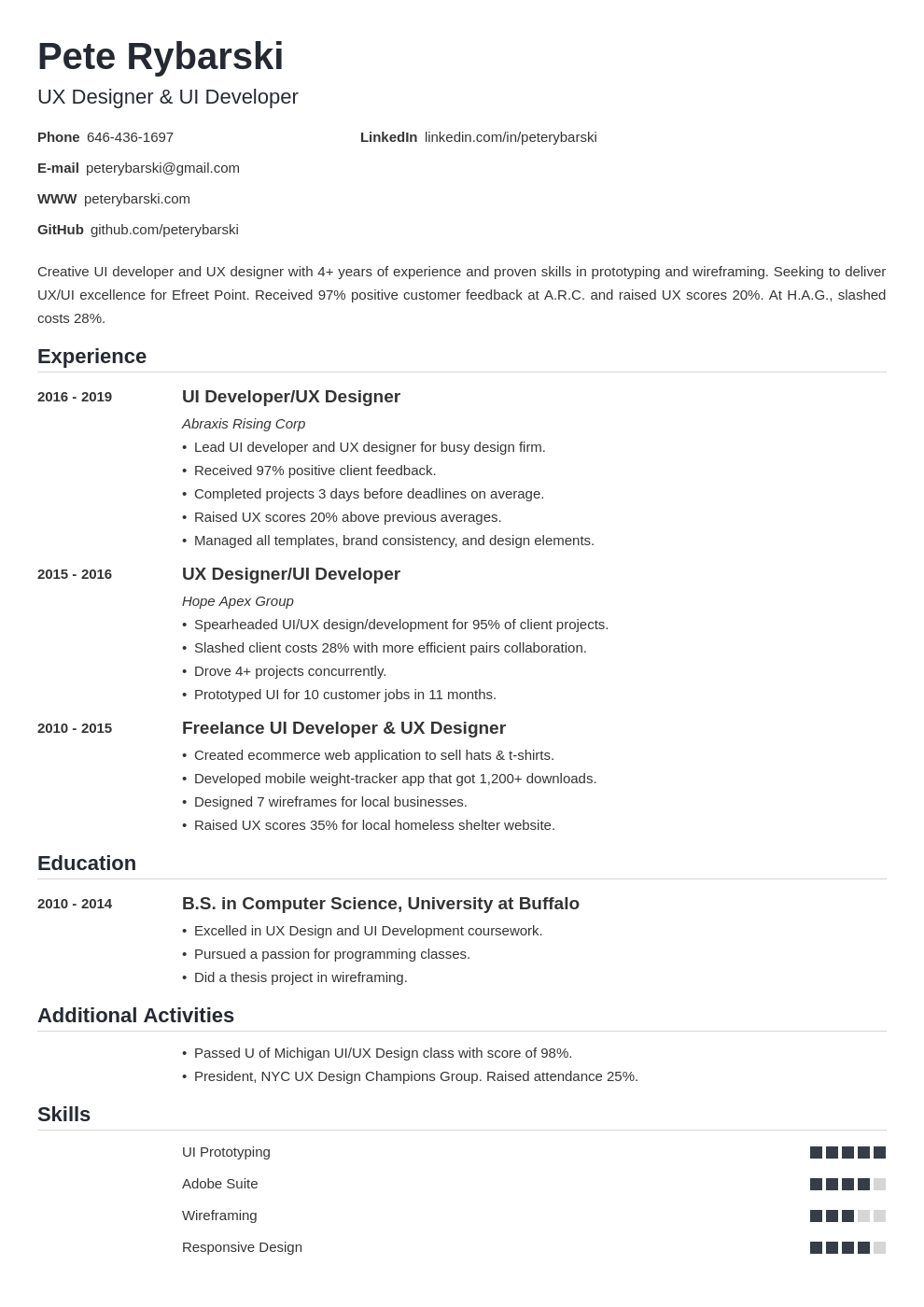 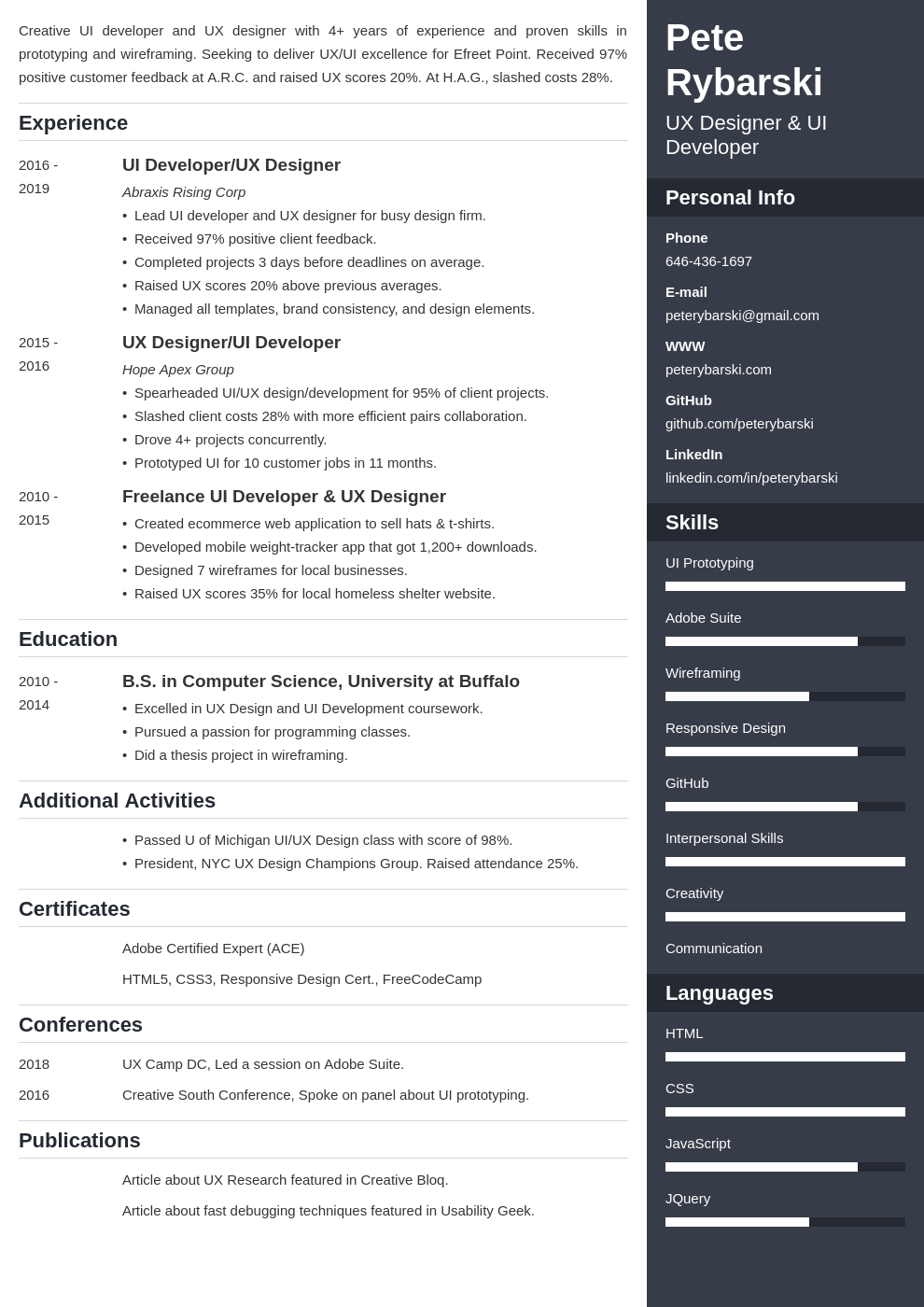 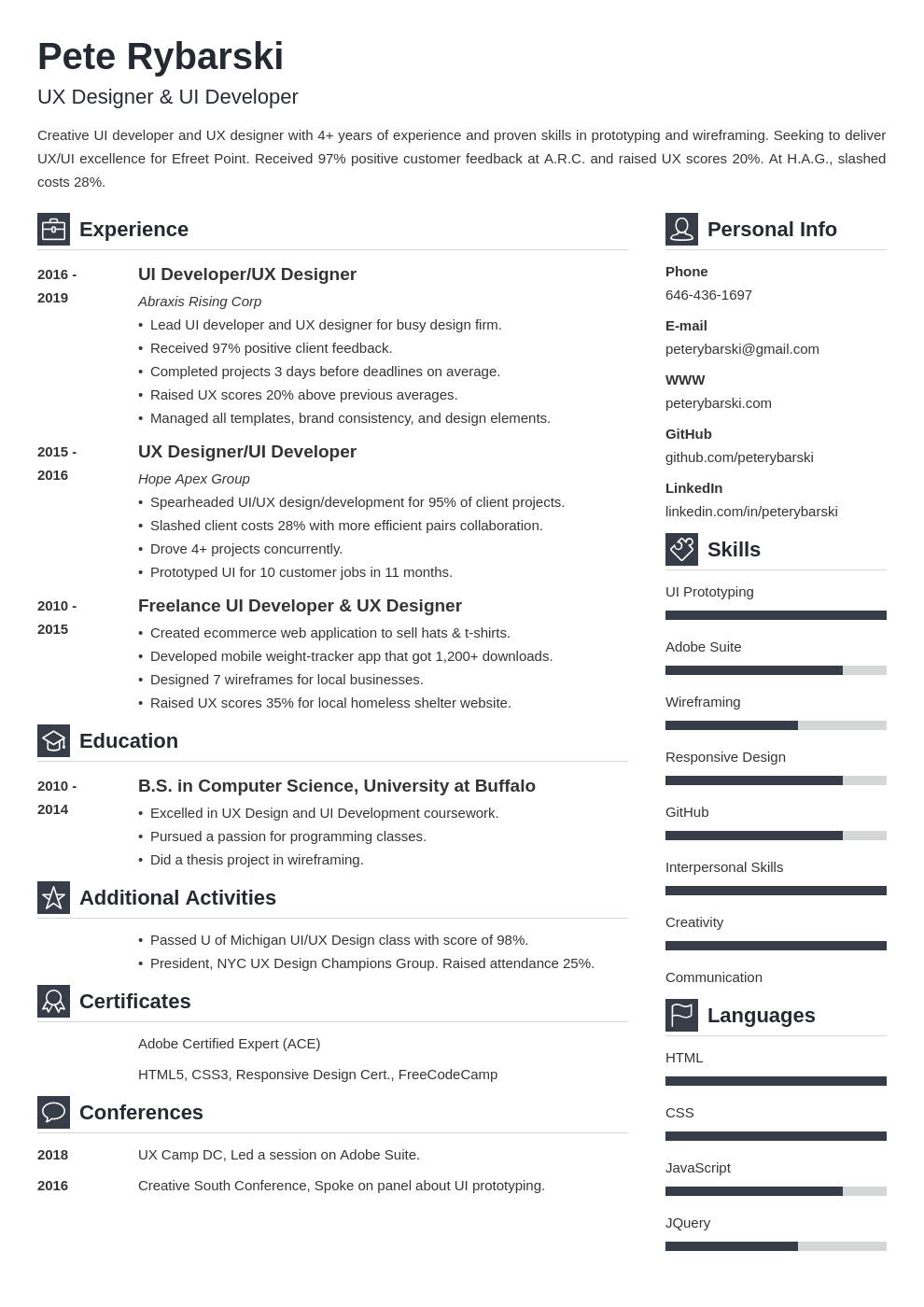 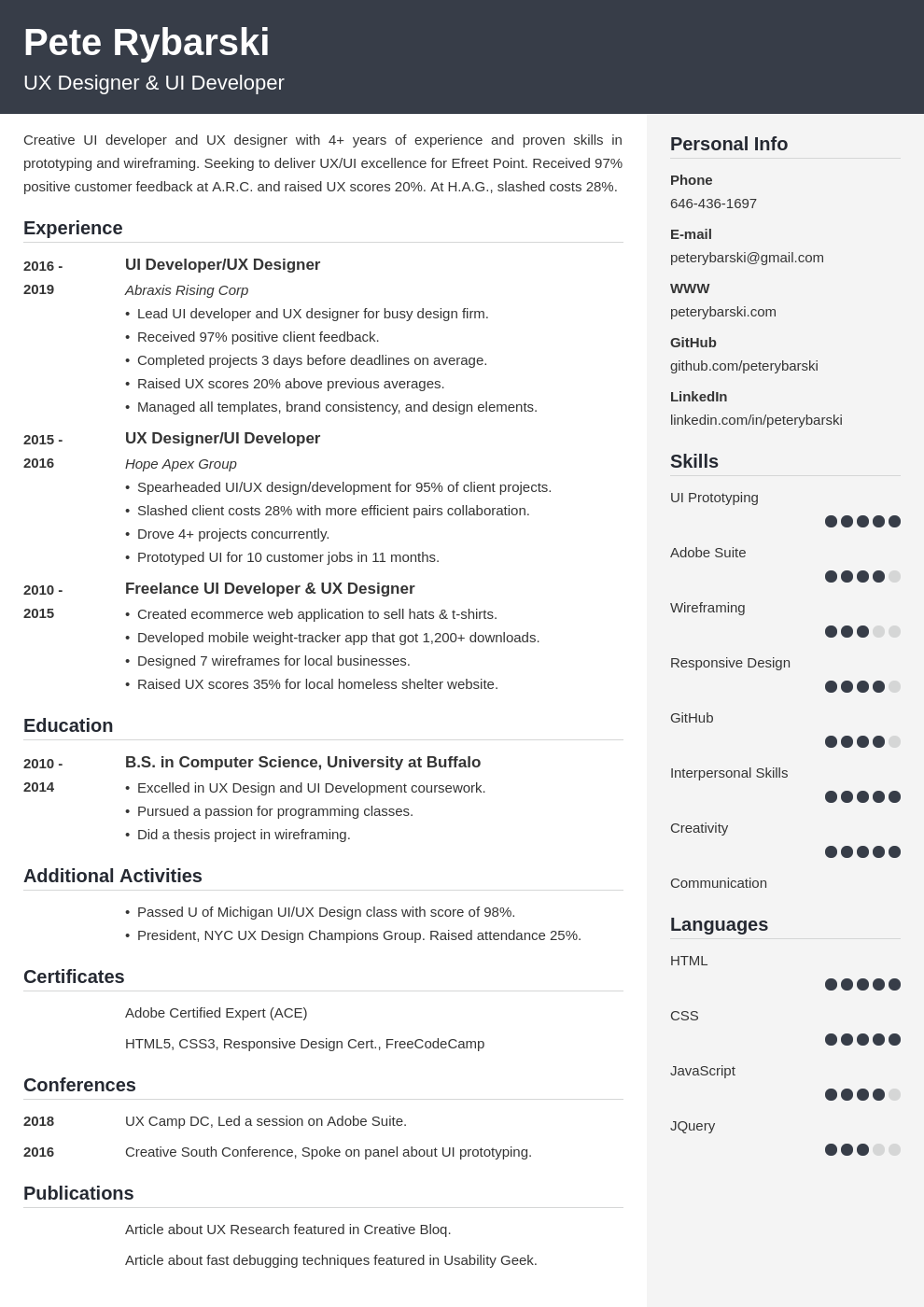 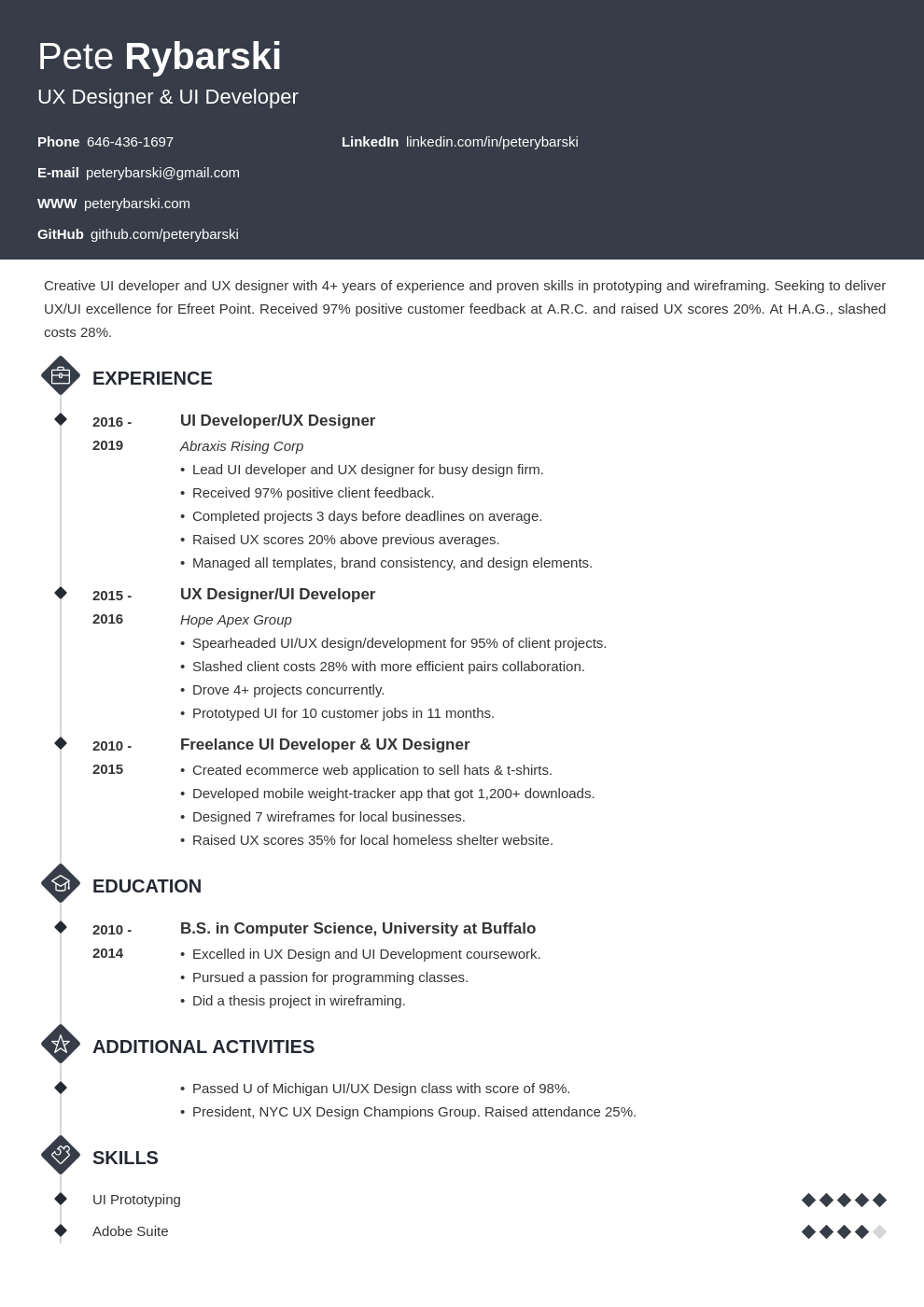 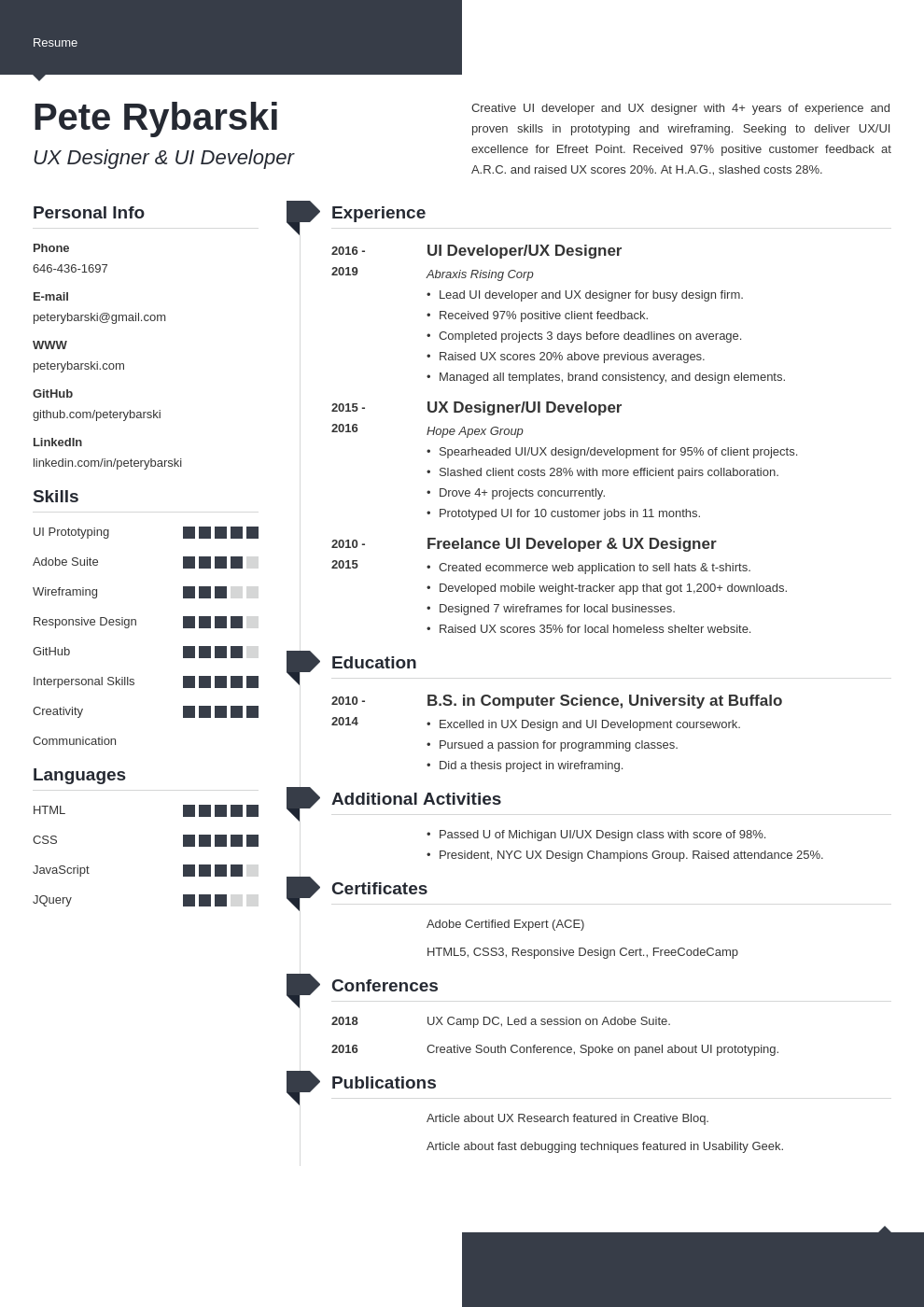 Emailing a Resume to Get a Job: Resume Email Samples [50+ Tips]

Learn how to email a resume the right way and start getting more job offers. See a proven resume email sample and learn how to write one yourself.