Staying up to date professionally can be tricky business. As your career and job history evolve, so does the look of your CV. And CVs aren't the only thing people have to maintain now: LinkedIn has increasingly become an important professional tool. No wonder the platform was Microsoft's largest acquisition to date a few years ago at £26.2 billion. Many job seekers today must maintain the classic CV as well as a LinkedIn presence, consistently updating both.

We surveyed over 1,000 people across the U.S., including a mix of those who are looking for work and those actively employed. They shared their experiences with CV updating and LinkedIn profiles. If you're questioning a career change of your own or need an refresher on staying up to date, keep reading. 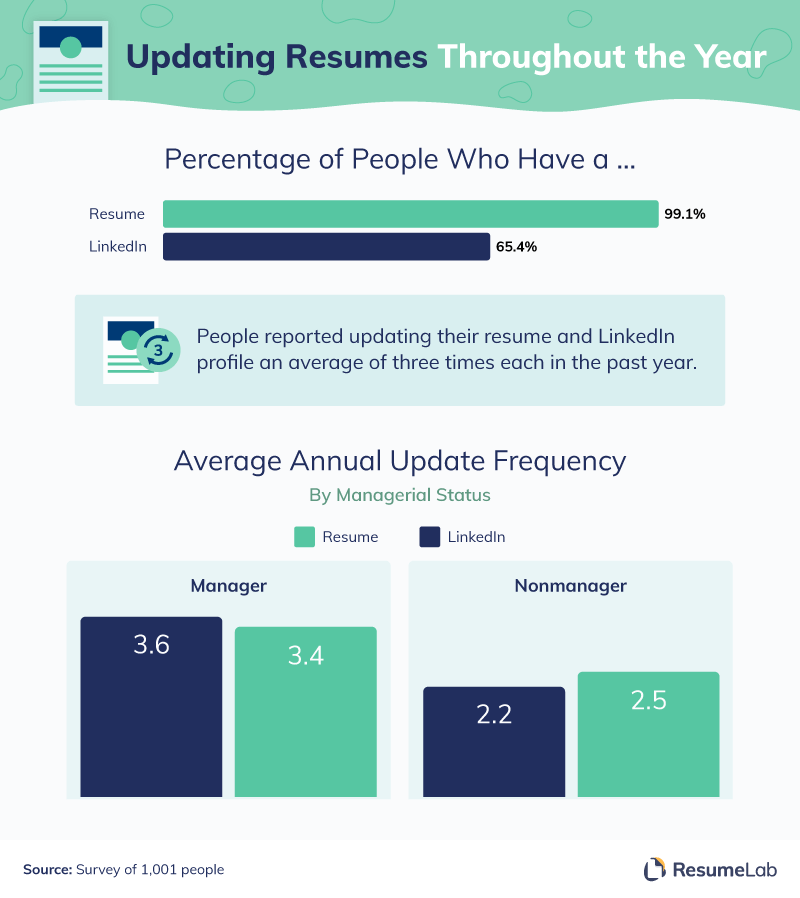 First, we looked at people's typical habits regarding keeping their career resources current. We asked who had a CV and who didn't, as well as who was on LinkedIn. We also considered managerial experience as potentially playing a role in the frequency with which respondents updated these professional documents.

Nearly every single person had a CV, even if they were unemployed. By nearly everyone we really mean nearly everyone: not even 1% reported not having a CV on hand. Even though not as many had a LinkedIn profile, the number was still substantial. Sixty-five percent currently had a profile (and the platform's engagement rate grows consistently).

Within the past year, respondents had updated both their CV and their LinkedIn profiles an average of three times. Nonmanagers, or those likely earlier in their careers, updated their CVs just two and a half times during that span. There may simply be an age factor at play. It's also possible that managers, being more established in their industry, are more likely to share their expertise on LinkedIn and ensure their myriad skills are always accurate on their CV. 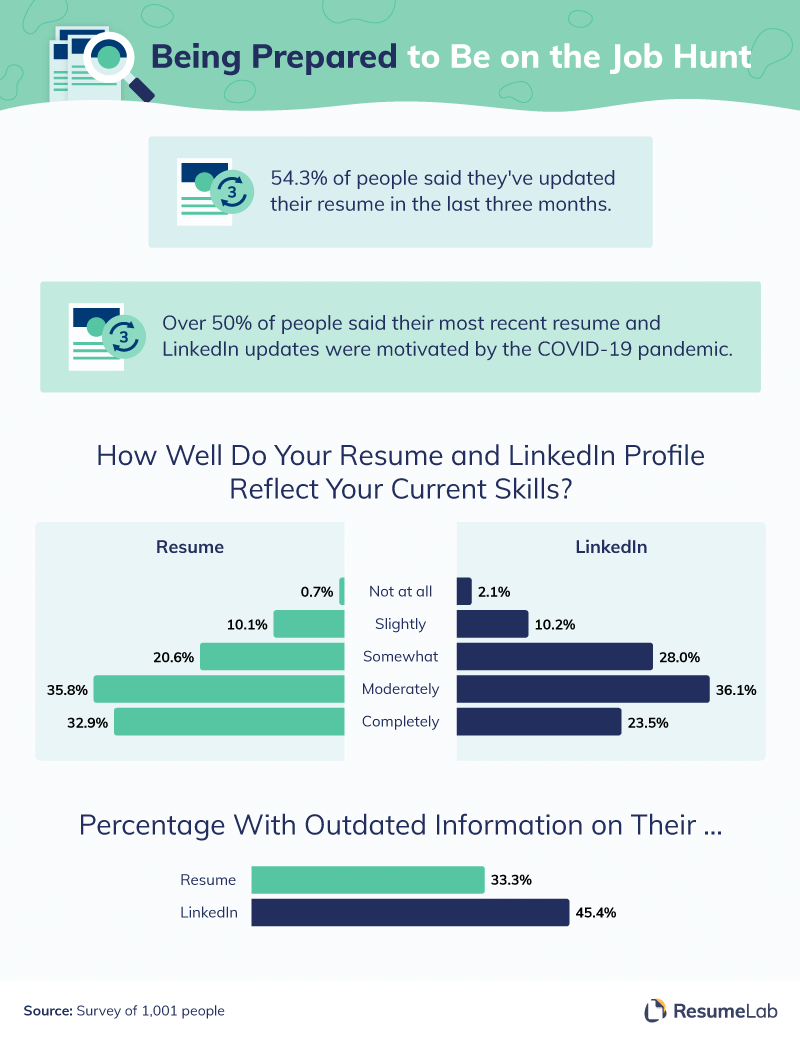 Being prepared to pivot your career or take on something new is always important, as many have learned this year in particular. Since the outbreak of COVID-19, more than 30 million jobs have been lost. In getting ready to reenter a shifting workforce, we asked how this recent economic disaster has impacted people's CV decisions, in addition to how well both CVs and LinkedIn represented their current skills.

Within three months during the spring of 2020, about half of respondents –or 54.3% –had updated their CV. Of those, over 50% said the update was specifically motivated by the pandemic.

When candidates jumped to update mode, they may have overlooked crucial improvements. Respondents were much more likely to leave outdated information on LinkedIn than they were on their CV. When asked how well their CVs represented their current skill set, 68.7% reported moderately or completely, while only 59.6% said the same thing about their LinkedIn profiles. Forty-five percent of respondents overall said their current LinkedIn contained outdated or inaccurate information. And this is something which could be costing them jobs (or at least sending the wrong message to potential connexions and employers). LinkedIn isn't something that can be ignored right now.

Applying Against the Odds 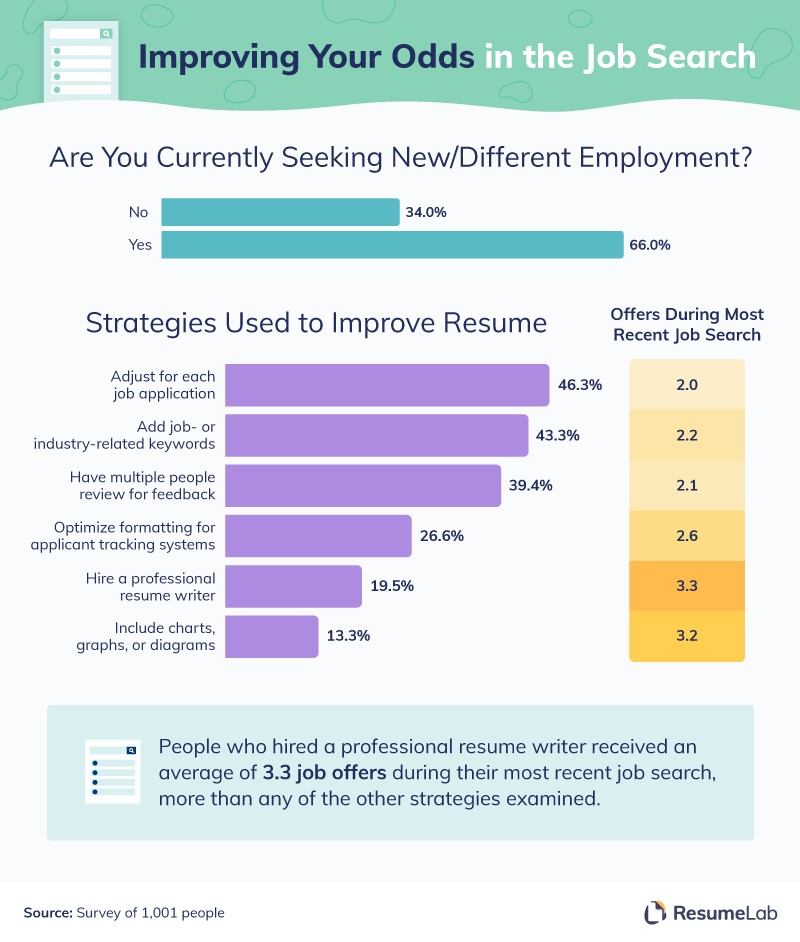 The fallout from the pandemic has created a difficult situation for many job seekers. With so much competition and so few jobs, how can you stand out? We broke down the tactics that have been the most successful this year in order to increase job offers.

Most people we spoke to were actively looking for a new job, but some were met with more success than others, at least in terms of job offers. And, as it turns out, the most effective methods were often the ones most rarely used.

Nearly half of respondents knew to adjust and tailor their CVs for each specific job listing they applied for. This can show employers that you've taken the time to really consider how you would fit into said role. That said, this technique didn't necessarily lead to the most job offers. Instead, the most offers, on average, were received by those who hired a professional CV writer. Although only 19.5% of respondents tried this, it landed them 3.3 offers on average, more than any other strategy we looked at. Price estimates suggest this service typically costs between £110 and £130, which hopefully is a cost recouped by an eventual offer. Even if hiring a professional CV writer isn't feasible, seeking out resources and education about how to put forward a truly exceptional CV pays off, as our study shows. Including graphs and diagrams was even rarer still, but encouraged nearly the same number of offers. 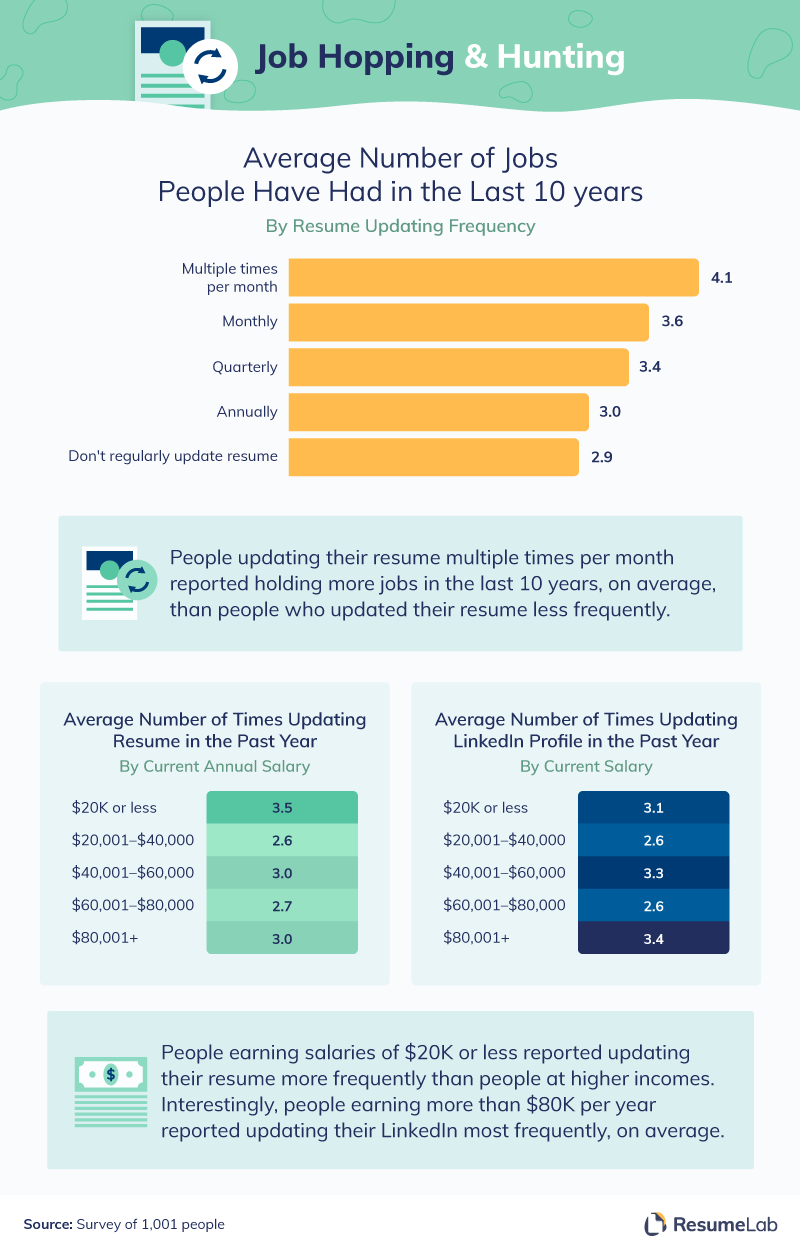 The last part of our study analysed the relationship between professional updates and number of jobs in a career, as well as the interplay of salary and job resource updates.

The more often people updated their CV, the more jobs they'd had within the last 10 years, on average. Whether this is a case of cause or effect at play is unclear: More jobs necessitate more updates, but more updates could also indicate a more proactive job search.

We also looked at how frequency of updating resources correlated to annual salary, as salary can be an indication of where a person is in their career. People with salaries of £20,000 or less reported updating their CV an average of 3.5 times in the past year, more than any other salary bracket. People with annual salaries of £40,001 to £60,000 and £80,001+ were the next groups most frequently updating their CVs (an average of three times).

When it came to LinkedIn, it was a bit of a different story. People in the highest income bracket updated their profiles most frequently in the past year at 3.4 times. This could be that as people earn more money (likely the product of progressing further into their careers), they want to improve and develop their personal brand by being active and maintaining a constant presence on the platform. It's also possible that these higher earners have tapped into one of the key benefits of LinkedIn: networking and interaction. They could be posting and updating more so that they can connect with other people and get their profile seen by the people they're targeting.

As new as LinkedIn is (in comparison to the classic CV), it's hard to see the approach as a trend. As company co-founder Konstantin Guericke told Business Week, "We're here to build a business, not to create something cool." And as respondents have revealed, the site is a crucial tool to maintaining a professional presence and gaining new opportunities.

The art of the CV will forever evolve, whether on LinkedIn or good old-fashioned paper and ink. ResumeLab is deeply committed to these updates and ensuring applicants can find jobs that suit their wants and needs. If you need more information on how to make a great, modern CV that works for either approach (LinkedIn or traditional), ResumeLab is ready to help. Our team of experts and in-depth industry research is at your fingertips 24/7.

We surveyed 1,001 people about their habits with updating their CV and personal LinkedIn profile.

When reporting strategies they had used to improve their CV, respondents were instructed to select all options that applied. Therefore, percentages will not add to 100.

The data we are presenting rely on self-report. There are many issues with self-reported data. These issues include, but are not limited to, the following: selective memory, telescoping, attribution, and exaggeration.

No matter where you are in your career, it can be difficult to put together a CV that accurately reflects what you bring to the table and gets your foot in the door. If someone you know would benefit from the information in this study, you're able to share for any noncommercial reuse. We ask that you link back here so the study and its methodology can be reviewed. This also gives credit to our hardworking contributors who make this work possible.

Rate my article: how often to update
Thank you for voting
Average: 5 (4 votes) 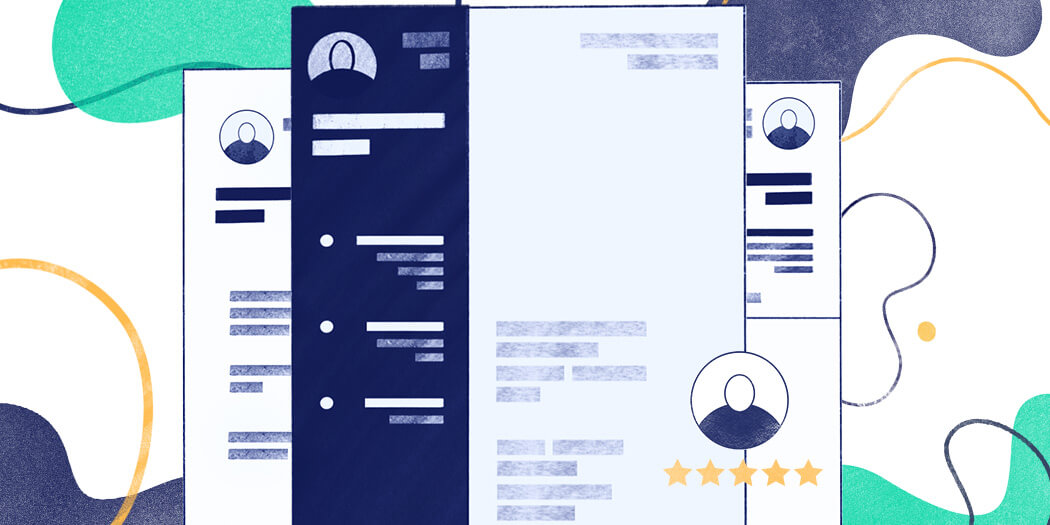 How to List Work Experience on a CV: Sample Job Descriptions

A CV job description is a CV section where you list your professional experience, usually in reverse-chronological order. It means you start with your most recent position and proceed backwards. Each entry should contain 3-6 bullet points. It is recommended to include 10-15 years of work history on your CV. 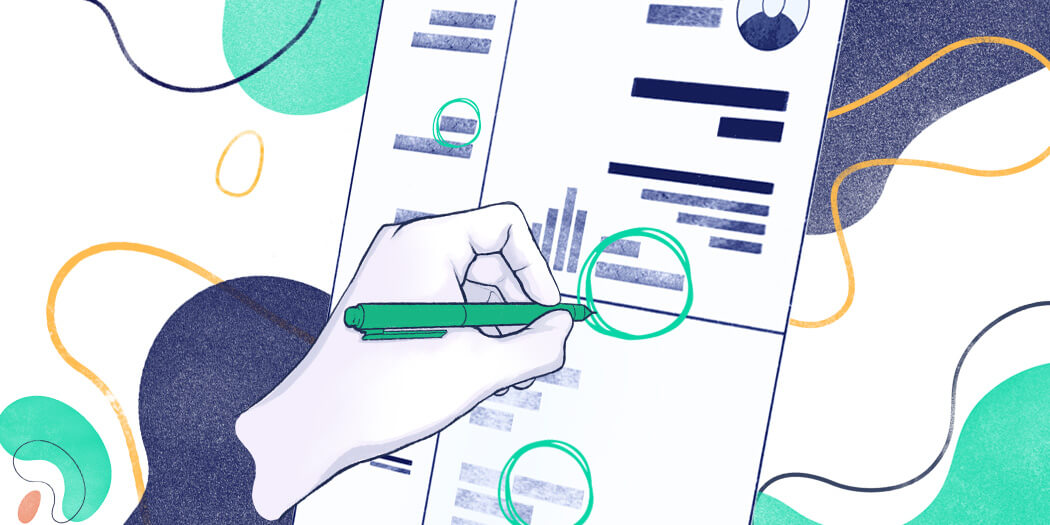 CV words that add horsepower to any CV. This CV action words list is so well organised you can find the best CV verbs for your CV in your sleep. 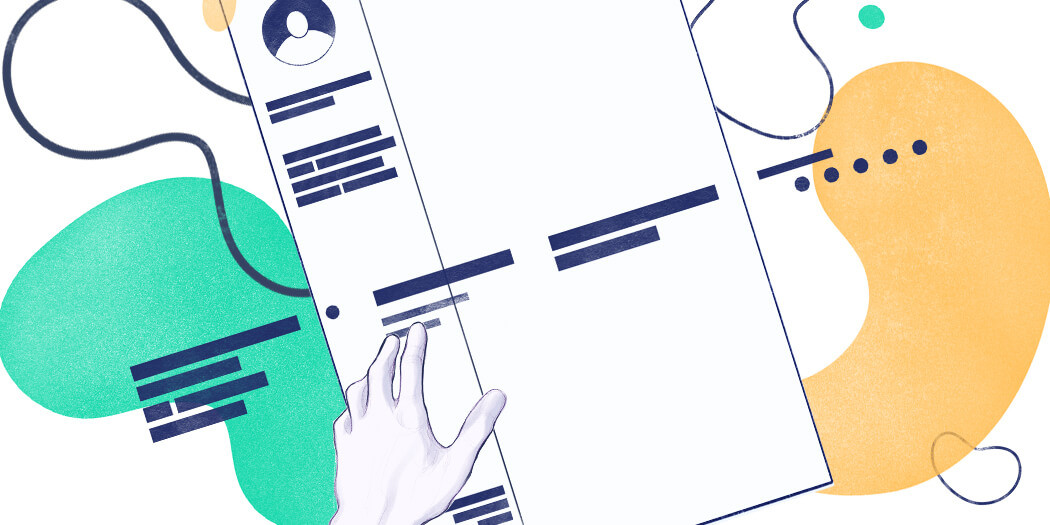 What to include in a CV? Which CV sections to keep off? This complete guide outlines exactly which things to put on your CV to make it shine.