Writing a cover letter takes time and effort, there’s no denying that.

But are cover letters still necessary in today’s job search? Wouldn’t it be great if you could skip writing one altogether?

There are many contrasting opinions on that matter—most, supported by outdated studies or reports.

Do you need a cover letter?

Let’s hear from those who would read it.

How Important Is a Cover Letter?

A cover letter is an important component of the decision-making process among 83% of hiring managers, recruiters, and HR staff.

In a separate question, 83% respondents claimed that a great cover letter can secure you an interview even if your resume isn’t good enough. Bottom line—writing a cover letter can help you make up for flaws in your resume in more than 8 out of 10 cases.

Is a cover letter always required?

Even if not required, cover letters are usually preferred:

Should you send a cover letter if it’s optional?

Even if a cover letter is optional it can still dramatically boost your chances of landing a job: In other words, that “optional” cover letter is pretty much mandatory in 2020.

Why is a cover letter so important?

According to HR pros, cover letters are important and useful for the following purposes: Keep your cover letter professional and focused on your career. No need to force jokes, look for common ground with the hiring manager or get overly cute.

Time for a recap then—

When do you need a cover letter?

With such an overwhelming majority of hiring pros highlighting the importance of cover letters, it would seem an obvious career move for job-seekers to send a covering letter alongside their resumes. Is it that obvious, though?

According to recruiters, most of the candidates don’t.

Surprisingly, no matter what the job ad says, 6 out of 10 candidates don’t write a cover letter.

If you were on the fence about writing a cover letter, you should already be convinced.

One final question to consider—

In What Form Should You Send a Cover Letter?

There’s no dilemma if you’re applying via an automated system. Most likely, you’ll just have to follow the instructions and upload your cover letter or type it up in a proper field.

But what about applying through email? Should the email be the cover letter? Or do you need an attachment?

Sadly, we can’t give you a perfect answer.

When you submit a job application via email:

Pay close attention to the job ad. Chances are, the preference regarding the cover letter will be specified.

No information about how to send a cover letter?

No need to obsess over it. Whether you write an email cover letter or attach your covering letter to your job application message won’t make or break your chances.

Back in the day, a cover letter served as an actual paper cover page for your resume. Its purpose was to formally introduce you to the hiring manager and encourage them to read the resume.

This survey was run by OnePoll on behalf of ResumeLab. In it, 200 recruiters, HR specialists and hiring managers were surveyed.

The data rely on online self-reports after eligibility screening. Each participant responded without any researcher administration or interference. Potential issues with self-reported data include but are not limited to exaggeration, selective memory, and attribution errors. Some questions and responses have been rephrased for clarity and ease of understanding for readers. In some cases, the percentages presented may not add up to 100 percent: this is either due to rounding or due to responses of “neither/other/don’t know” not being presented. 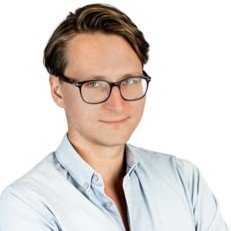 Michael Tomaszewski, CPRW
Certified Professional Résumé Writer, Career Expert
Michael Tomaszewski is a resume expert and a career advice writer for ResumeLab. He is a certified professional resume writer (CPRW) and a member of the Professional Association of Résumé Writers & Career Coaches. Michael works with candidates across all career stages—from entry-level job seekers to executive coaches. His insights have been featured in CIO and Best Life Online. His mission is to help you tell the story behind your career and reinforce your professional brand by coaching you to create outstanding job application documents. More than one million readers read his career advice every month. For ResumeLab, Michael uses his connections to help you thrive in your career. From fellow career experts and insiders from all industries—LinkedIn strategists, communications consultants, scientists, entrepreneurs, digital nomads, or even FBI agents—to share their unique insights and help you make the most of your career. Michael has a degree in Liberal Arts and specializes in personal and professional storytelling.

Looking for cover letter tips and advice to really stand out? Want cover letter mistakes to avoid and other dos and don'ts? You've come to the right place.